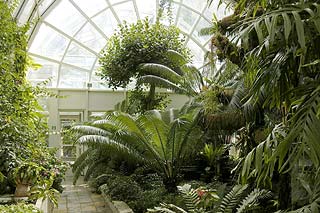 In December 1818 University of Warsaw was given over 20 ha of land to be occupied by a newly established Botanic Garden. Orangeries were already on that ground as they had been built at the time of King Stanisław August.  One of them – trebhauz (marked S1 on the map) – has remained in the Garden until today. It holds a rich collection of succulents, that is plants which, in order to survive long periods of drought, store water in a special tissue found in their leaves or stems. Among them there are plants resembling gigantic candles – American cacti of the genusCereus, as well as ‘living stones’ (Lithops). The latter are small South African plants looking like tiny grey pebbles. There are also many Mediterranean plants such as for example a specimen of European Fan Palm (Chamaerops humilis) from before WWII, one of two palm species that appear naturally in the wild in southern Europe. Collections of tropical and subtropical plants have been grown in two other greenhouses – subtropical (S5 on the map) and tropical (S3 on the map). On the fake rocks with a waterfall in the sub­tropical greenhouse ferns such as Nest Fern (Asplenium nidus) or Staghorn Fern (Platycerium alcicorne) as well as epiphytic cacti of the genus Selenicereus grow. In the pool one can adore tropical water lilies (Nymphaea) with pink, yellow or bluish flowers. In the collection of climbers a few po-werful species of Birthworts (Aristolochia) with their original flowers, acting as a flytrap, are worth seeing. Some rare, exotic, useful plants species have also been grown there, like for example: ginger (Zingiber officinale), coffee (Coffea arabica), avocado (Persea gratissima) and Passion Flowers (Passiflora) as well as many other plants that can be found in the description of the educational trail Tropical Economic Plants. Many species of palms and fig trees grow in the Palm House (S4 on the map). Among them a ‘strangler’ – the Moreton Bay Fig (Ficus macrophylla) can be found. In natural conditions, with the help from birds its seeds land on branches of nearby trees; then the fig sends its aerial roots down the host trunk. The roots grow bigger and bigger and in a short time they reach the ground and eventually kill the host tree. In the greenhouse representatives of the Bromeliad family (Bromeliaceae) grow on structures imitating trunks and branches. There are also families of Arums (Araceae), Tropical Orchids (Orchidaceae) as well as Cycadaceae. One of the most interesting specimens are 40-year-old specimens of Cycas and Stangeria eriopus. They resemble palms, but they are not closely related to them. These are gymnosperms that first appeared on the Earth around 300 million years ago.