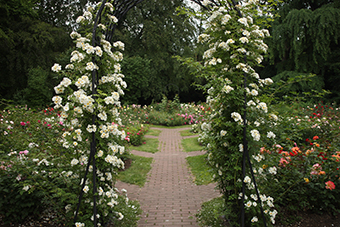 A special, separate part of the Ornamenta Plant Section is occupied by a rose garden (also called a rosarium). It is located on the right side of the main entrance to the Garden. As it started in the Ancient times, planting roses in gardens has a long tradition. Roses were cultivated in Persia as early as in the 12th century BC. The poetry of the time combines a motif of roses with garden nightingales. Later the art of rose cultivation appeared in ancient Greece and Rome as well as in gardens of the Islamic world. To European gardens roses were introduced in the 12th and 13th centuries by crusaders coming back from the Middle East. However, they were earlier imported from Islamic gardens on the Iberian Peninsula. In Medieval Europe roses were an important, symbolic element of Marian gardens, which functioned as a reflection of the biblical garden, ‘the closed garden’ – hortus conclusus. Even at that time rose gardens had the present shape of a circle or a square divided into regular flower beds. In the rose garden (no IX on the map) cultivars mostly selected after WWII have been planted. There are no species appearing naturally in the wild. Among the varieties collected in the garden large-flowered roses are the biggest group, besides them there are multiflora roses also called baby roses, representatives of old cultivars that bloom more than once in a season – the so called remontant roses (for example 'Frau Karl Druschki' introduced in 1901) as well as miniature roses and English roses that combine qualities of old varieties with the modern ones. Climbing varieties with their supporters are in the corners of the rose garden. They are selected according to their ability to survive in harsh climatic conditions. Among them one can find for example: Rosa helenae 'Semiplena' which every year is covered with small, light yellow flowers and a widely-known and appreciated 'New Dawn' with silvery blush-pink flowers. In our collection one can also find a group of roses bred at the end of the 20th century by David Austin. Those are the so called English Roses bred from the cross between varieties of Old Roses with the modern ones (R. thea hort.) and with Large-flowered Roses (R. floribunda). Among them the following varieties can be found: 'Winchester Cathedral', 'Graham Thomas', 'William Shakespeare', 'Heritage'. However, also Polish cultivars constitute an important group in the collection. They were bred by Leopold Grąbczewski, Bolesław Wituszyński and Stanisław Żyła after WWII. Those are for example: 'Chopin', 'Merkury', 'Kutno', 'Venrosa', 'Św. Tereska z Lisieux' or 'Warszawa'. 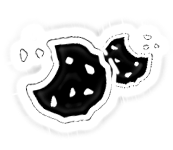